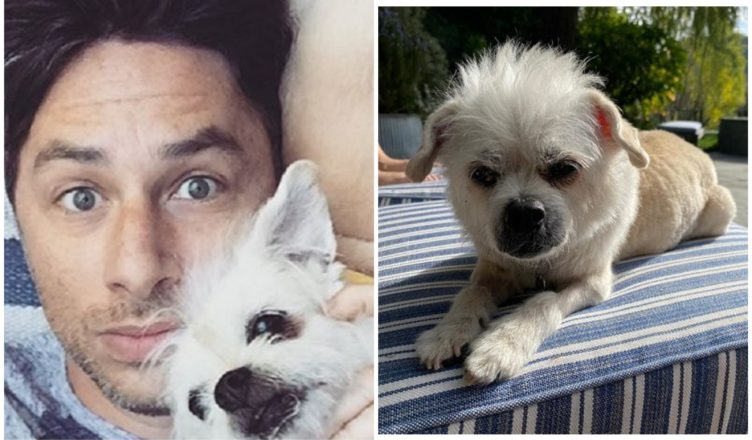 Dogs are not only domestic animals for people, but also best friends and family members. They give us love and loyalty and they are also emotional assistance. So it is the best thing to have dog in your side who will never nake you feel alone.

However it is a fact that dogs do not live very long. The average lifetime of a dog  is 12 years. It varies greatly across breeds, but for the most part, median lifespan, defined as the age at which half of a population’s dogs have passed away and half are still living, ranges from 10 to 13 years. Individual dogs may live far longer than the breed’s average lifespan. If your dog has lived or is living longer than the normal lifetime, consider yourself lucky. Zach Braff, a famous actor and producer is one of these lucky persons.

He is an actor, director, screenwriter, and producer from the United States. He announced the death of his beloved and long-time dog on Instagram with a touching letter.
“I had to bid my dearest buddy, Roscoe Braff, farewell today.” He’s been alive for 17 years!”

Braff, who is now 45 years old, also expressed his gratitude for having Roscoe as his pet dog. He went on to advise others to adopt a dog, similar to what he did with Roscoe, in the same article.

“I feel so lucky that we found each other. Adopt a dog. It was the best decision I ever made.” His letter ends up with these heartbreaking words:
“Goodbye, my old friend. We’ll catch up some other time.”
Braff’s girlfriend, Oscar-nominated actress, Florence Pugh, also penned a tribute to Roscoe. In an Instagram post of her own, she wrote,
“The coolest of cool.
Goodnight sweet Roscoe. Thank you for all the love you gave and for all the kisses you treated me to.
I genuinely count myself lucky that I got to see such a beautiful friendship between a man and his dog.
RIP Roscoe It’s equally as heartbreaking to lose an animal friend as it is to lose a loved one. At the same time, a dog may be a savior and a life-changer. In some people’s life, they even play the most crucial role.

“A pet is a true gift that may transform your life and give you great joy and happiness. Responsibility, tolerance, compassion, discipline, fun, and, most importantly, unconditional love are all things that pets teach you.”