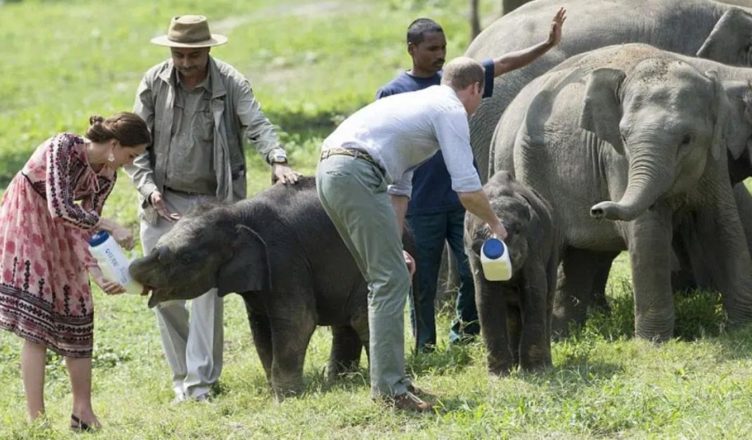 The Duchess of Cambridge couldn’t stop grinning after being given the opportunity to feed a young rhino and an elephant calf at an animal shelter in India today.
Kate and William had a lot of fun acting like the parents of a group of fragile animals that have been harmed or orphaned in the wild and are being rehabilitated.

However, after a four-day trip, Kate revealed that she was ‘terribly homesick,’ adding that Prince George was ‘too naughty’ to come along on the trip since the 2  years old would be running and screaming.’

She reportedly informed the elders that the small girls dancing about the village reminds her of Princess Charlotte, who was 11 months old at the time, and that ‘following time we visit, we’ll surely bring them along.’ At the Centre for Wildlife Rehabilitation and Conservation in Kaziranga, the Duchess of Cambridge chuckles as she nurses a newborn elephant. Kate, an animal veterinarian, tends to a newborn elephant at a sanctuary that helps animals that have been ill, left homeless, or orphaned. Kate also visited the Centre for Wildlife Rehabilitation and Preservation in Kaziranga, Assam, to feed a newborn rhino. At the Centre for Wildlife Rehabilitation and Conservation in Kaziranga’s Panbari nature reserve, a newborn rhino gives Kate the runaround.

Prince William also tries to nurse the calves with a special bottle, which he uses to offer them milk or formulas.

During a journey to a refuge in Assam’s Kaziranga National Park, the couple feeds starving animals with huge bottles of milk.

When the calves first saw the rangers move for the bottles, they screamed, apparently anxious to acquire their food.

The Duke and Duchess were at Kaziranga National Park, which is habitat to elephants, water buffalo, rare swamp deer, tigers, and two-thirds of the world’s Indian rhino population. The park, which encompasses over 800,000 square kilometers and is a UNESCO World Heritage Site, is a rare blend of grassland, marshes, and wood

At the Centre for Wildlife Rehabilitation and Conservation, William, a committed conservationist, and Kate were introduced to the juvenile creatures (CWRC).

It supports wild animals with emergency treatment and rehabilitation. During a trip to the Mark Shand Foundation, the Duke and Duchess decorated an elephant parade statue. The Duke of Cambridge smashes a coconut on a rock (left), while Kate walks with the CEO of Elephant Family Ruth Powys.