Whitney Bralee now lives in Menlo, Georgia. She is a thirty-year-old handicapped mother of three. Because the lady is unable to move, she is assisted not just by her family, but also by her beloved dog, a 3-year-old husky called Banner!

When unusual things began occurring to him lately, Whitney recognized the dog was attempting to tell her something. 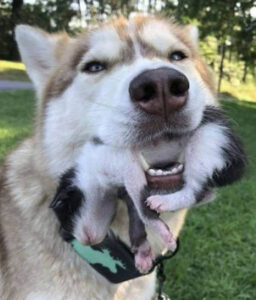 Banner growled at the owner, lunged at her, snatched her clothing, and pulled her out of the home.

“It was amazing because my dog always listened to me,” the lady claims. “And then, instead of obeying orders, she practically lost control and pulled me down an unfathomable path.” 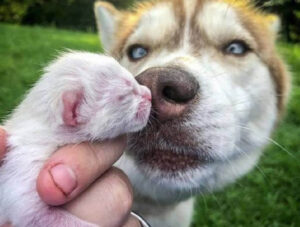 Whitney followed the creature far into the shrubs and into the forest belt. And then she discovered a cardboard box tossed into the woods!

The husky stuck its snout inside the cardboard and pulled out a little, damp white kitten… And then there was another… And here’s another!

“I was afraid since they didn’t make a sound and were so chilly,” Whitney says. “I assumed they were all de.a.d, but they weren’t!” And I have no clue how Banner discovered this box. ” 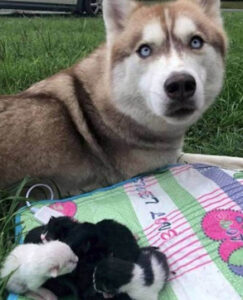 The dog delivered the quiet babies—seven in all—to her owner. The orphans were brought home, fed, and warmed.

True, they were quite small—they seemed to be just a day old—and caring for such newborns proved to be a significant struggle for the crippled mom.

But she was successful! After all, the husky had come to her aid.

The Banner kept vigil over the cats, never leaving their side. The nervous dog turned into a nanny who sits still for hours next to a group of kittens and keeps them safe and in order. 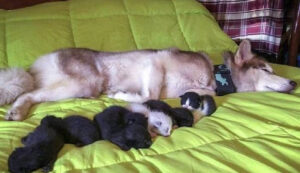 She now rests exclusively close to the crumbs, licking and warming them with her lovely wool!