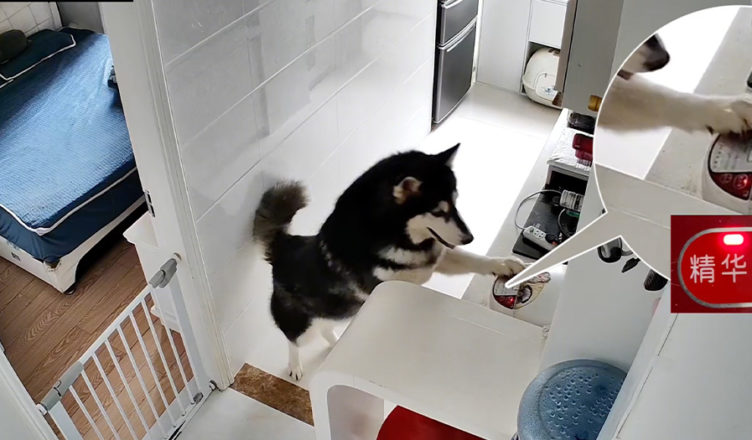 If you ever doubted that dogs are a man’s greatest friend, consider this pet Husky in China that assisted its owner in cooking rice.

A video shared on the Chinese social networking site Douyin shows a guy interacting with his dog, Lucky, through his home CCTV system.

The 39-year-old guy, identified as Zhou from Zhejiang province, told Qianjiang Evening News that he’d put rice in the cooker before leaving the home to go grocery shopping.

He had been delayed, though, since he had decided to take a Covid-19 test.

Zhou can be heard saying in the video, “Lucky, I’ll have to wait a long time for the nucleic acid test.”

“Are you able to turn on the electric cooker?”

The dog, which was originally observed sitting on the ground in the home’s kitchen, rose up, stood on his hind legs, and turned on an electric power strip into which the rice cooker was connected.

“It’s next to your paw,” Zhou directed Lucky.

With the rice cooker now turned on, Zhou instructs Lucky on how to use it—a somewhat more difficult operation.

However, it did not seem to be a difficult task for the husky, who, after a few tries and support from Zhou—”You pressed it incorrectly.” Try again, this time pressing harder. ” manages to start the rice cooker.

Zhou has owned Lucky since he was a puppy, according to the Qianjiang Evening News.

The husky, now six years old, was taught to do a range of home tasks such as flushing the toilet and turning on the apartment’s lights.

Lucky is smart, as shown by other videos on Zhou’s Douyin account. In one, he distracts Zhou by opening the freezer before stealing some yoghurt.

Zhou was sure Lucky could turn on the power strip because he had taught him before, but he said he had never tried to teach his dog how to use the rice cooker.

Zhou, a blogger, said that he and his dog had created an invisible understanding.

His wife, on the other hand, does not share that unique bond.

“Lucky only responds to my commands,” he said. “He doesn’t appear to grasp what my wife is saying.”