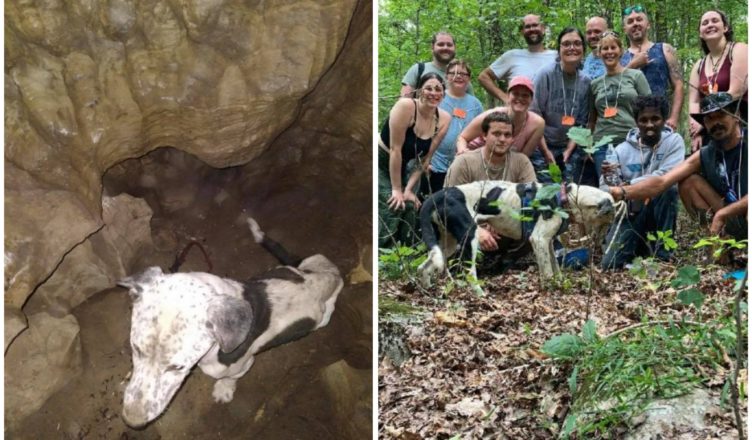 Sometimes, dogs find themselves caught in tough situations and need human assistance to get out.

Like one dog that went into a 30-foot cave earlier this month—luckily, a bunch of onlookers found him in time and saved the day.

On September 4, a party of cave explorers were visiting Dewey Hickman Nature Preserve in Indiana when they saw an unusual sight: a dog stranded 30 feet below in a cave.

According to Harrison County Animal Control, there were paw prints down the shaft, and it’s possible the dog got its collar caught on a tree on the way down and ended up at the bottom after squirming free.

The dog was also quite skinny and looked to have been there for around two weeks. He was most likely subsisting on rainwater gathered in an empty turtle shell at the cave’s bottom.

Thankfully, his misery came to an end when the explorers saw the puppy and rappelled down to retrieve him.

The climbers named their new acquaintance Dewey, and the dog thanked them profusely.

“When Hawkeye got out of the cave, he was really thin,” Harrison County Animal Control officer April Breeden told The Dodo. “He was really nice after they were in the cave with him and until he came out.”

“They went down to look at it and then came back up.” He began barking, ‘Don’t leave me.’ ”

The starving dog was transferred to Harrison County Animal Control after being rescued.

Fortunately, “Dewey” found his way home quickly; on September 6, animal control stated that they had located the dog’s owner. “His real name is Hawkeye,” they wrote. They also praised everyone who spread the story, including Hawkeye’s family, who contacted them after seeing their dog on the news.

Hawkeye was reunited with his family on September 7, a joyful finish to his terrifying ordeal: “When he saw his dad, he was so pleased, leaping and licking him,” Breeden told The Dodo.