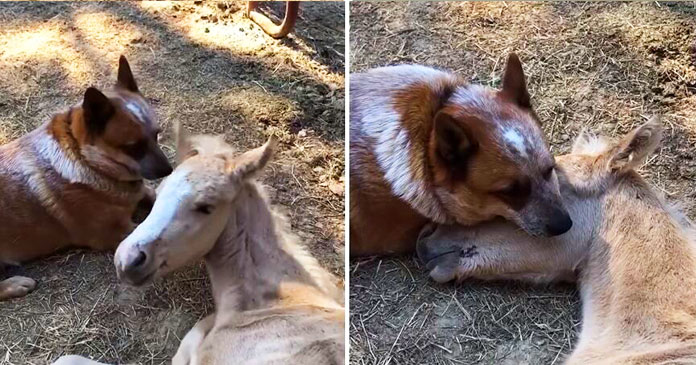 Dogs are extremely protective and loving. If they notice something wrong with another animal, they hurry to help them. They are always willing to provide an extra help to those in need. So here’s a dog who became the orphaned foal’s caretaker and best buddy. Because his mother, a 22-year-old mare called Sandy, had to be eut.h.a.n.i.z.ed due to worsening health, the foal became orphan.

They resided in Fayette, Alabama, at S&K Quarter Horses. Their owner’s name is Karla Swindle . Tye, the mother’s 9-day-old foal, was affected by her mother’s loss. It was a horrible experience.

Tye, on the other hand, was immediately comforted by Karla’s dog, Zip. According to Karla, the dog remained with her all night in the barn lane — the dog simply laid next the foal. 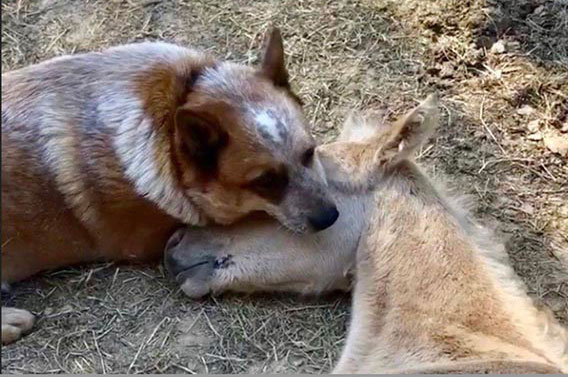 The dog appeared to realize that the foal was upset, so he comforted him with a compassionate paw.
According to Karla, the dog was lying by his neck, wailing like a baby. Tye had lost his mother, but he had Zipping as a buddy who was soothing him.

According to Karla, the dog acted as if he had adopted the foal and was showing him that he wasn’t alone.

Karla stated that this was the first time Zip had acted in such a manner.

Karla said that they had previously nurtured the foals and that he had only been able to view and gaze at them through the door. But he suspected something was different this time.

Dogs have a high level of emotional intelligence and can detect when something is incorrect. This was the first time he licked the foal and laid by its side. Zip took care of his companion for several weeks. Every morning, he would rush to the stall, and if he saw the foal resting down, he would walk over and place his head on him. 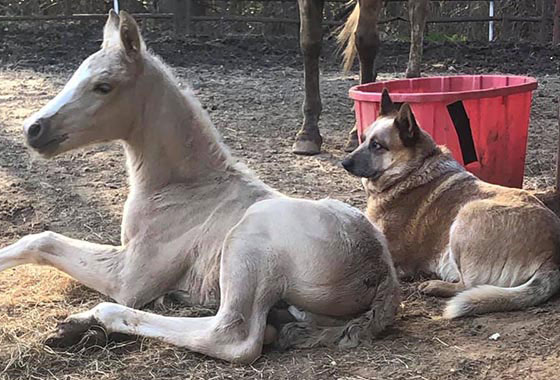 Tye has matured into a healthy horse, thanks only to Zip’s care and companionship throughout his early years. Tye spent a lot of time as a mature horse with his horse pals, but he had a particular spot in his heart for zipping. For the rest of their lives, they will be friends. It was a very unique friendship between the two of them.