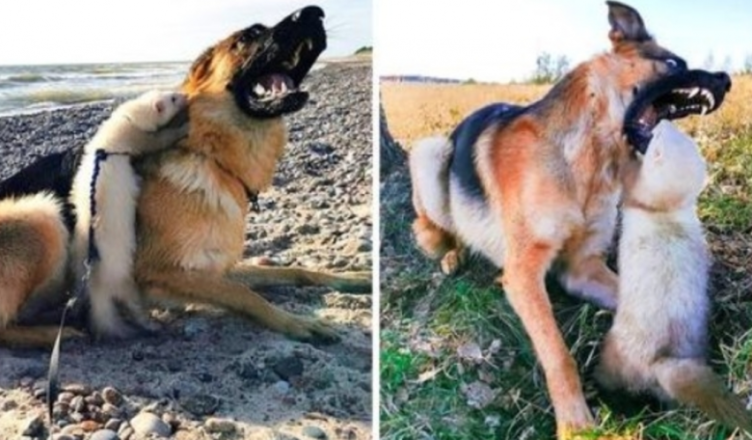 Diana Grib had longed to raise a German Shepherd and a ferret since she was a child. Despite her interest in both species, Diana understood she needed to be cautious and careful while impulsively taking the two animals.

Diana formally adopted a German Shepherd dog, Nova, and trained her for a year to be sociable with other animals. Nova grew into an incredibly compassionate dog that would watch for and care for little animals as time went by.

Finally, Diana decided to adopt Pacco, a two-year-old ferret. She felt worried when she presented Nova to the small ferret. For the first several days, the dog opted to be sympathetic with Pacco and merely kept an eye on him from afar. Pacco was shy, but he saw Nova as a gorgeous redhead! 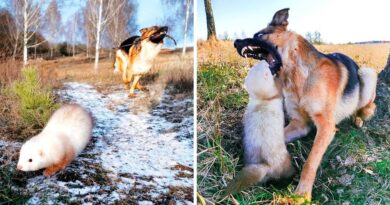 Pacco dropped his shyness and became great friends with Nova after just a few weeks! They would dine together, play around with each other, and sleep cuddled together. Diana immediately took the two on outdoor outings, which proved to be the highlight of their lives! Pacco enjoys getting straight inside Nova’s mouth and inspecting her teeth on occasion!

Ferrets are regarded as sophisticated animals that are both loving and sensitive. Even though Pacco likes to play tough, Nova is always gentle with him and never harms him. Despite their differences, Diana claims that Nova and Pacco get along well because they are both courageous and inquisitive. 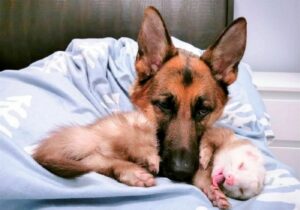 Diana has realized her aim of parenting these two magnificent creatures together thanks to her careful planning, and that is quite remarkable! Nova and Pacco’s bond is unbreakable!