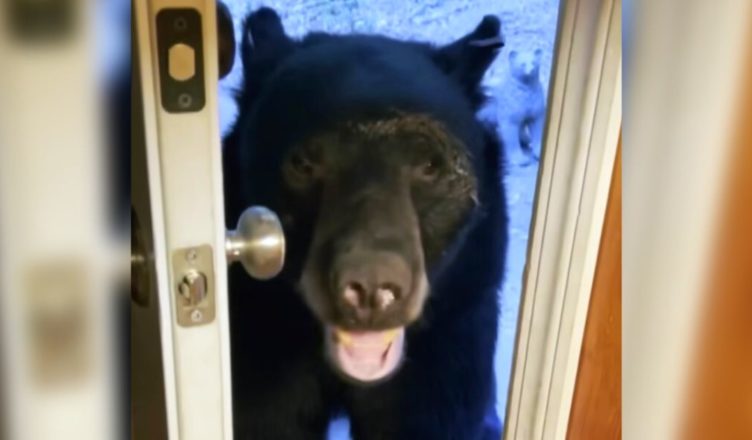 Who do you think will walk in when your front door opens?

If you live with others, you could anticipate your partner or husband, kids, parents, brothers, or roommates being on the other side of the door.

When Susan Kehoe’s home door opened in Highland Lakes, New Jersey, it wasn’t a human on the other side. Yes, a black bear used his jaws to unlock Susan’s front door. It’s a good thing Susan was standing just outside the door when it occurred.

She was able to scare the bear away without injuring anybody. How?

She made use of her voice. Susan told the bear to go and closed the door behind him in a gentle manner.

Susan told Inside Edition, “They can tell by the tone of your voice.” “They know whether I say things like, ‘Oh, such a nice guy,’ or ‘Stop it!’

Susan is an expert in her field.
It also helps that Susan is a black bear scientist who has spent years researching and collecting data on them. So when the black bear walked through the door, she knew exactly what she had to do.

The black bear didn’t seem to grasp what she was saying at first.

He put his front paw over the threshold and on the mat beside the entrance as soon as he opened it. Susan had to say her words over and over again to make sure the black bear heard her.

And he did it.
The black bear took a step back and grabbed the doorknob with his jaws, pulling it shut.

He didn’t completely shut it down, so Susan knew he’d attempt to open it again.

“Aren’t you going to open it again?” Susan inquired about the bear. “You little stinker, shut the door.” With her soothing voice, she continued coaxing him to shut the door all the way.

Susan, it turns out, lives in an area where black bears are abundant. And she was also visited by this bear a few months ago.

Susan spotted this bear at her front door when she opened it. And she did the same thing, speaking calmly to him in order to drive him away.

“Bears are very intelligent!” Susan remarked on the YouTube video of that first visit, “This bear learnt how to lock the entrance door to my home.” This is why, besides her job, Susan wasn’t scared when she saw a black bear walk into her house.

What would you do if a bear broke into your front door?

Most people would either flee or engage in combat with the bear.

However, it is useful to view films like these to learn what can be done in scenarios involving black bears. They are smarter than we believe. Sure, not every black bear will be like this one, but it’s important to learn more about them from folks like Susan. In the video below, Susan gently scolds this inquisitive black bear!