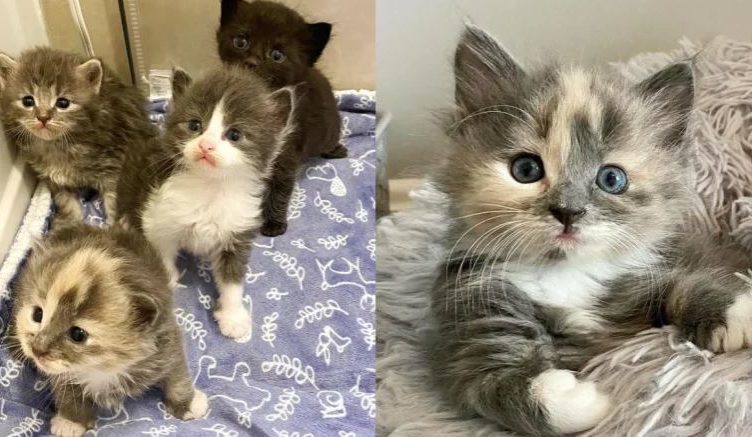 Two worried members of the public noticed a litter of four kittens wandering the streets. Their cat mother was nowhere to be found, and the rescuers couldn’t abandon the kittens.

They took the kittens to the Animal Welfare League of Arlington (in Virginia) so that they could receive the care they required. Penny Richards, a rescue foster volunteer, took them home and got to work straight away.

Under all that fluff, the kittens were just three weeks old and were skin and bones. From the beginning, they were a close-knit clowder, as if they were striving to keep each other company on the journey. 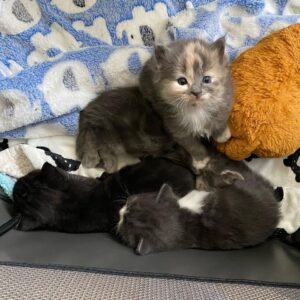 “The first night was a challenge. Penny told Love Meow, “They didn’t know how to latch on to a bottle yet were too young to eat solids.”

“I prepared a milky slurry with wet food, and the four of them loved it.” They definitely didn’t know how to chew it correctly, and they were far too young to be eating it.” 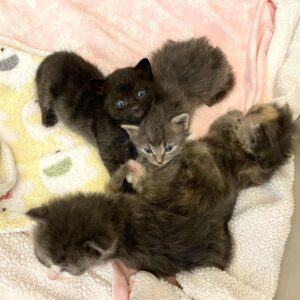 The kittens eventually got the hang of the bottle after a lot of practice and were settling in to their new home. They began to gain weight and ate like champions.

Beck, the tiniest kitten, need feeding help for a time before she was strong enough to eat on her own. Her siblings would frequently gather around her and cuddle her, as though to encourage her. 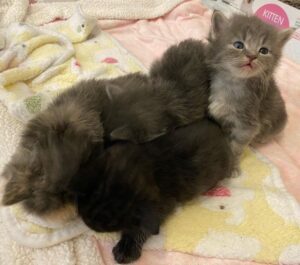 Brook the tortie immediately became at ease in the company of her people and learned the art of lap cuddling. 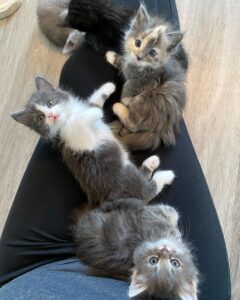 “As soon as I sit down with them, they immediately pile up on my lap together.” Penny told Love Meow that Bayou and Beck’s favorite pastime is climbing up my shoulder.

They don’t mind if the lap snuggles are shared with other foster kittens. “They all run around chasing one other and are the greatest of friends.” They may be seen cuddling on my lap most of the time.” 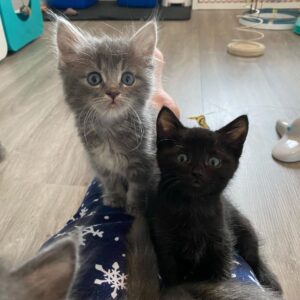 “Beck has a priceless face that matches her priceless spirit. Penny commented, “She meows continuously until I take her up, and then she starts her loud purr motor.”

“Among three sisters, River is the only boy. He has wispy white hairs on his bottom, as though he is becoming older.” 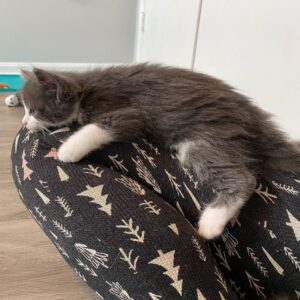 “Bayou isn’t afraid to express what she wants. She is the loudest of the group, although she enjoys sitting on someone’s lap. When Bayou and Beck are resting, they like to’sploot’ on my legs.”

Brook likes to wrestle with her siblings and roll about, flaunting her adorable tummy. “Her coat is gorgeous, and her orange is so diluted that, coupled with the grey, she is in fact a very light cream,” Penny wrote.

She is now  Penny’s little supervisor, standing on her lap and keeping a close eye on her. 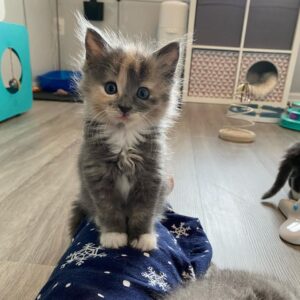 The litter of four is thriving in foster care after a difficult start, and they’re eager to find their own home where they can have limitless lap snuggles.