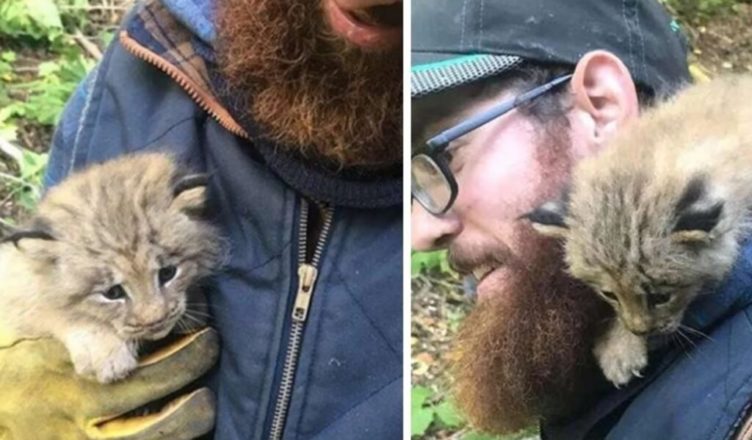 Mathieu Patry of Quebec, Canada, came across a little animal that resembled a cat on his way to work one morning. As he got closer, he was surprised by what he discovered. Mathieu was going through the trees when he noticed the little furry creature on the path’s edge.

“At first, I thought it was a kitten. “I went up to it to get a better look, which is when I saw its huge paws and big ears,” Mathieu said in an interview.

These unique traits showed that this feline was a wild animal that had gotten separated from its mom, rather than a domestic cat. “I identified it as a Canadian Lynx,” Mathieu continued.

He wasn’t sure if the mother Lynx was nearby or if the baby had been left, so he decided to leave the Lynx alone in the hopes that the mom would come for him. He went about his work, but the Lynx remained in his mind. “I went back the next day to see whether he was still there,” he added in the interview, “and I could hear his screams from afar.”

Mathieu waited a bit longer before taking action. He was concerned that the Lynx kitten would perish on his own. “His mother had to have left him since he was frail.” He found the lynx beneath a tree, grabbed him, and took him back to his house. “I sought help from a wildlife rehabber at a neighboring zoo,” Mathieu explained. After calling the professionals, he was given directions to nourish and look after him for the day.

Mathieu kept a close check on the youngster at night to make sure he was well. “The next day, I brought him to the zoo,” Mathieu stated. The Lynx was discovered to be quite young and would not have lasted much longer on its own. Thanks to the rehabbers’ aid, the Lynx is back on course and functioning magnificently. When he’s ready, he’ll be released back into the wild.