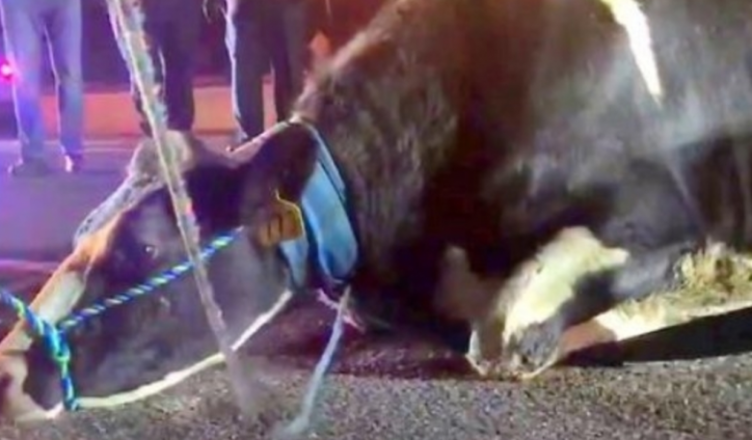 Brianna, the cow, was pregnant when she was loaded onto a vehicle bound for the butcher with the other cows.

She realized that going to the butcher would be “game over” for her and her baby, so she took a chance and leaped from the moving truck in the midst of the busy motorway. Brianna stutters through the traffic, asking for assistance. When the police arrived, she was terrified by the lights and the bustle and refused to cooperate. Following that, several hunting animals and a dash to Skylands Animal Sanctuary Rescue.

Nobody knew Brianna was pregnant at first. When the sanctuary’s vet learned about it, he became concerned for the baby’s health. Brianna was hurt when she fell out of the car and when the police tried to catch her, and it was very likely that she would have problems after giving birth. Brianna went into labor two days after, much to the surprise of the vet, and gave birth to a baby female calf called Winter! Winter’s birth is described as a miracle, and the sanctuary pledges that she will never be split from her mother. Brianna’s powerful motherly spirit and will to defend her kid in the face of adversity inspire us. We wish them a long and prosperous life!

Watch the video below to see how Brianna dodged her doom and fought for rescue in traffic!