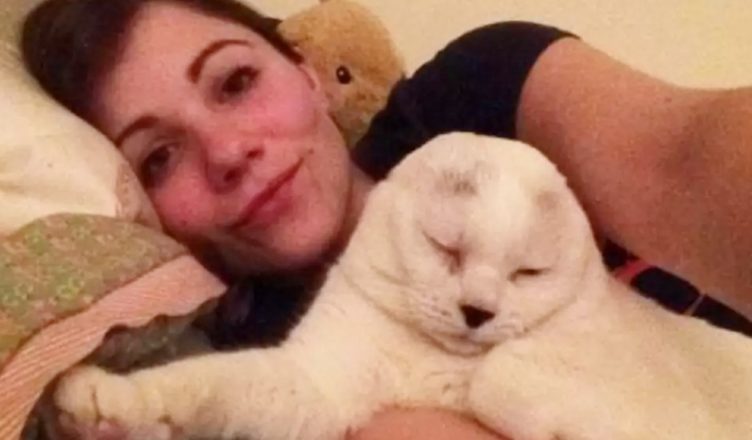 Molly Lichtenwalner knew she wanted a pet with special needs when she chose to adopt one. She had grown up with a deaf sheepdog and understood how rewarding it might be to have a special-needs pet.

When she arrived at the shelter, Otitis the cat instantly drew her attention. After being in a vehicle accident, Molly made the decision to adopt Otitis.
“As a consequence of the vehicle accident,” Molly stated, “I suffered from anxiety.” “Growing up on a farm, I was always surrounded by animals, and after my injury, I understood how much animals benefit me and my mental health.”

Molly adopted Otitis after he was surrendered to the Reline Rescue Association in Baltimore. He had given up when he began to develop enormous, painful cysts in his ears and his family could not afford surgery. Staff at the shelter donated funds to assist with paying for the beautiful boy’s surgery, and today Otitis, the earless cat, is making a difference in his new home. Molly knew he was the one the moment she laid eyes on the lovely Otitis.
“I knew he was the cat for me,” she said. I knew he needed the home and affection I knew I could provide. I subsequently discovered that although many others inquired about him, none had applied for him—I was the first. Otitis has spent his days since being adopted by his new family playing and snuggling with his mother. She told The Dodo that he assists her in dealing with her fears and can even detect when she is sad.
“I woke up from a nightmare one night,” she told The Dodo, “and Otitis was lying on my pillow.” My heart was racing, and Otitis could see I wasn’t feeling well. ”

“He climbed from the pillow onto my chest and slept there until my heartbeat returned to normal, then went back to his pillows,” Molly said. “He’s really sensitive to my emotions.”
Inside Edition aired a cute film about otitis. The feline has an amazing resemblance to his favorite toy, a plush white seal, according to the show. Otitis’s life is joyful, healthy, and pain-free now that he lives with Molly and Dad.
“He is by far the finest thing that has ever happened to me,” Molly tells The Dodo.

Otitis is a joyful, healthy senior who adores his family. He now has two new cat siblings whom he adores. He also has a new little human sister that he loves as much as his parents.

Otitis has found a wonderful new home. Go to Otitis’ Instagram feed to view more photographs and videos of his experiences.

Check out the video below from Inside Edition on Otitis!